Crown of Coral and Pearl: Review

Crown of Coral and Pearl by Mara Rutherford is the first instalment in a new young adult fantasy series. Taking place on top of the ocean and on land, it shows the lengths that those will go to for their family and others, for almighty power. It is fast paced and action packed and despite this, the characters are also extremely well developed. 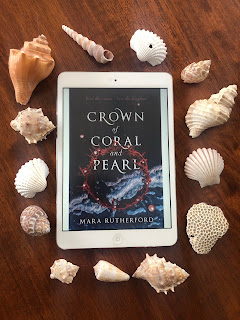 Before I go too much further, I will add the synopsis below:

For generations, the princes of Ilara have married the most beautiful maidens from the ocean village of Varenia. But though every girl longs to be chosen as the next princess, the cost of becoming royalty is higher than any of them could ever imagine… Nor once dreamed of seeing the wondrous wealth and beauty of Ilara, the kingdom that has ruled her village for as long as anyone can remember. But when a childhood accident left her with a permanent scar, it became clear that her identical twin sister, Zadie, would likely be chosen to marry the crown prince- while Nor remained behind, unable to ever set foot on land. Then Zadie is gravely injured, and Nor is sent to Ilara in her place…  When she arrives in Ilara, Nor is confronted with a cruel prince and a castle that is carved into a mountain which is difficult to leave. She discovers that the prince has sinister plans for her homeland and that she needs to uncover them before it’s too late.

Crown of Coral and Pearl is a unique take on young adult fantasy. It incorporates settings which I have never read about before and a fascinating plot.  The idea of having an ocean village was interesting from the get go. It was intriguing how this race of people lived out in the sea, on top of the ocean in floating houses and were unable to step foot on land without getting into trouble by the kingdom that ruled them. Once we get further into the story, I really liked the idea of the New Castle and Old Castle. Having a castle built into a mountain, with all these interesting caverns underneath and other features made for a change from the normal ‘royal castles’ which feature in every young adult fantasy book. The castle appeared to have a personality of its own which really added to the plot.

The plot was a wonderful aspect of this book and really made it shine. I liked how the author focused on so many themes including the strength of a sisterly bond, the concept of beauty, hidden love, the struggle of ultimate power and the strength of determination to name a few. I admire the author and how she didn’t rush into the main plot of the story. She allowed adequate time to set up the main setting (ocean village), the relationships between the main characters who were living there, provided an opportunity for the reader to understand their situation within the kingdom, what they did for an occupation and an insight into how the most beautiful girl was sent away to be queen. By setting the book up like this, the reader was able to have a strong grasp about what was occurring before the plot moved along and a deep understanding of the characters and their motives. Throughout the rest of the book, the plot was well paced and the reader was not left bored at any point. There was constantly something happening to Nor or something that she was trying to find out, to assist her overall motive to stop the prince.

The characters were extremely well rounded and developed. They made the book so enjoyable and were very realistic in their descriptions and actions. While there were little physical descriptions, the characters were easily able to distinguish from their emotions and their actions that they made throughout the book. When the characters were happy, as a reader you could feel that through them and the same when they were sad or distressed. The author used a substantial amount of emotive language to get this across to the reader. I loved the relationship between Zadie and Nor and how they would do anything for each other. Despite the hardships that they faced, they were both willing to make sacrifices for each other to ensure that they were where they were meant to be. I also enjoyed seeing the relationship between Nor and Talin develop over time, as they came to help each other in their plight for the same thing, to protect the people of Varenia. The author can also write a villain extremely well. From his introduction, it was clear that Ceren was a character to be aware of as he appeared suspicious from the beginning from his intentions. One character I really struggled to like and did not feel sorry for was Nor and Zadie’s mother. She was so concerned about maintaining her twin daughter’s beauty, no matter the expense it had on her relationship with them. She was cold and even when her daughter was sent away to be married, she did not even have the heart to say goodbye. While she did not appear in the book for long, her impact on Nor was felt throughout the course of the book.

I extremely enjoyed reading Crown of Coral and Pearl. It was a wonderful book which delved into a new land and featured so many interesting and deep characters with calculating motives. I would highly recommend this to anyone who is looking for a new young adult fantasy read.

Thank you to Harlequin Publishers Australia for providing me with an advanced copy to provide an honest review.

Crown of Coral and Pearl will be released on the 19th of August in Australia.