Aus YA Bloggers Blog Tour: I am Change review

Good morning everyone and welcome to my blog stop on the Aus YA Bloggers, in conjunction with Walker Books, tour for I am Change by Suzy Zail.

I Am Change is a revolutionary book which focuses upon female empowerment and determination in the face of a society where women have no voice. It tackles some very complex and serious issues within Ugandan society and is influenced by a number of women from the country. Zail has taken elements from each woman’s story and woven them together to create a heartfelt narrative which gets to the core of the lack of human rights in the country, especially in regards to women. From the outset, it is an extremely moving and emotionally challenging read but has the power to provide those women with a voice of their realities in the 21st Century. 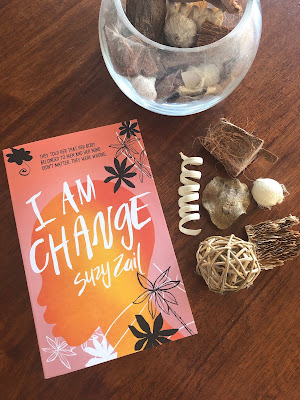 The narrative follows Lillian, a young girl living in a small African village, and her plight to fight for change in a society where women are considered to solely bear children and look after their family. While the norms of her society are against her, Lillian is strongly determined to show her family and her village that she is capable of so much more than just getting married off at a young age and having a large family.

From the outset of the book, it is clear that Lillian is a strong willed and determined young girl. She, unlike many other girls her age, is completely focused on attending school and getting as far in her education as she can. This isn’t considered the norm as it is in developed countries, as it is really only the boys who are expected to further themselves. While she is subject to many setbacks, her goal never seems to waver. Despite her family trying to prevent her from going to school and throwing obstacles at her, she still tries her best at everything that she does. When all this is going on, the raw emotion in the writing is evident. The reader is able to sense the fear instilled in Lillian, that her dream of completing her education is slowly being torn away from her.

This book is so raw and emotional and makes the reader aware of the injustices still going on the other side of the world. There are various triggering scenes which include rape, domestic violence and female genital mutilation. These are unfortunately all things which are still occurring in the daily lives on Ugandan women. Female students are exploited at school by male, dominating teachers who believe that they are there to rule over the female students. These girls are taken advantage of so that they are able to have the rights that the male students are given automatically. Lillian’s friend is one of the girls who is affected by this and Lillian wants to seek revenge but due to her standing, this seems like an impossible task. One of the saddest scenes in this book regards Lillian’s sister, Nakato. Nakato went missing years ago and when Lillian goes to the city, she sets herself a goal to find her. The reader discovers that the only reason Nakato fled was because she did not want to her genitals to be mutilated, which was considered to be a custom of their tribe. Due to this and the fact she was unable to return to her family, Nakato resorted to a life so far from what she had hoped for herself.

Another aspect of the book which really drew out the emotion was when the characters were talking about marriage. In the 21st Century, it is still common practice for girls under the age of 16 to be married to men more than double their age. The characters in this book were no exception as some of Lillian’s school friends were married off. Lillian was horrified by this and wanted to ensure that she was not subject to this, as she believed that people should marry for love and not to improve their social standing.

Overall, I am Change is a book which I believe all young girls should read (but maybe not until they are 15-16). While it did take me a little while to get into the book, by the end I was in awe of Lillian and the strength she possessed over her short life thus far. It is a book which promotes women’s rights in countries where women still have little rights and are treated incredibly poorly. It raises awareness of issues which, in Western countries, many people would consider to have disappeared many years ago. I hope that by raising more awareness of the injustices of these women, that change is able to occur in the future and these traditional views of these countries are able to adapt to be more inclusive of all.

I rated this book: 3 and a half stars out of 5
Thank you to Walker Books for a copy of the book in exchange for an honest review and for Aus YA bloggers for providing me with the opportunity to participate in the blog tour!


I am Change is available now in Australian bookstores.
Posted by Belleofthebooks at 15:56