Blog Tour and review: Trails in the Dust by Joy Dettman


Trails in the Dust by Joy Dettman is the seventh installment in the Woody Creek series. It follows Jenny Hooper and her extended family, as they grapple with their own issues and how these may come to impact the family to a larger extent. While it is the seventh book in the series, it can be read as a stand alone as the reader can gain most of the context from within the book. 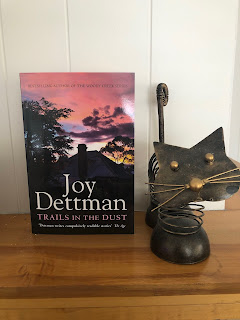 The synopsis:
After many tumultuous years spent grappling with the past, Jenny Hooper might have expected her latter years to be the best of her life, and they are - until tragedy strikes. Left floundering in a house full of memories, not all of them good, Jenny knows a reckoning is in order.But it won't be easy. History is beginning to repeat itself for Jenny's adopted daughter, Trudy, who finds herself trapped in an abusive relationship. Jenny and her older daughter, Georgie, can only stand by and watch as Trudy's life implodes. Meanwhile, half a world away in the UK, Cara and her husband Morrie nurture a devastating secret that keeps them at arm's length from Jenny. But most of all, Jenny wants to renew contact with the beloved son she lost decades before when she was at her lowest ebb. Only that, and having the chance to tell him the truth about what happened, will give her peace. But is it too late?

Trails in the Dust was my first Joy Dettman book so going into this, I was unsure what to expect or if I would be able to begin my reading journey of the series, starting with the final book. I feel like it would benefit readers to pick up from the beginning of the series, for clarity and to see the journeys that the various characters have taken over time. Despite this, it certainly could be read independently and most of the plot will make sense.

Dettman has cemented herself as an author that excels when writing about small, rural towns. The small Australian town vibe in this book connects the reader to the plot from the first chapter. Throughout the course of the book, we are provided with various different lenses to deepen our understanding of the situations which come about through the multiple POV. This is done in such a way that the reader is able to consider one character in a variety of different ways and how those around them feel about them. The main perspective focused on is that of key character Jenny. Jenny is portrayed as a caring mother at the beginning, yet this is contradicted during this book as she attempts to reconnect with her long lost son. This is a sore point for Jenny and due to this and other critical events during the book, Jenny is portrayed as someone who is quite flighty and willing to take risks. I found some of the decisions Jenny made over the course of the book difficult to understand, due to events which had previously unfolded. This adds to the quality of the book, as Dettman has the ability to make somewhat rash decisions feel natural and like something that would occur in real life situations. The inclusion of the flashbacks to various different points of Jenny’s (and the other character’s lives) were also insightful. The reader was able to attain a greater understanding of the context of the situations at hand and why they were so significant.

Trails in the Dust is quite a realistic book. The events and situations which unfold throughout the book are things which could easily occur within real life. The tragic death of loved ones, foster caring, domestic violence, issues relating to old age in general and adoption are all topics which are covered in the book. The characters within the book are also painted as imperfect too. Each of the characters have their own personal issues that they are coming to terms with and attempting to resolve. Some of these issues impact other characters in the book, while others just impact themselves. Despite the majority of the book being realistic, I found the part near the end where Nick is high on drugs and kidnaps Jenny to be somewhat unrealistic.Despite this, I could see how it was included due to the build up of tension between Nick and Jenny's daughter Trudy, throughout the course of the book.

I did find the book to be a little hard to read and follow at some points and am unsure whether this would have been aided if I had read the previous six books in the series. This may be due to the author’s incredibly descriptive style of writing which does take some adapting to. I also found the characters to be quite unlikeable, I’m not sure whether this was what the author was going for or not. They were so immersed within their own bubbles that they were not aware of what was going on around them and the implications their own actions were having on the world around them. There were also so many different characters, it was difficult to decipher who was related to who when it was often never explicitly stated, especially in relation to some of the side characters.  This may be easier for those who have read the other books in the series.

Overall, Trails in the Dust was a nice change of genre for me. I would recommend to those who enjoy books set around small country towns with an emphasis upon family. While it certainly can be read as a standalone, if you would like a little more context, I would recommend checking out the first book in the Woody Creek series.

Thank you to MacMillan Publishers for providing me with a copy of the book in exchange for an honest review.

This book is now available for purchase in Australia from bookstores nationwide.