Storm and Fury is a young adult fantasy novel which integrates supernatural beings into a high paced text. It is not the first novel of Armentrout's that I have read, I have previously read some of her YA contemporaries and also quite enjoyed them too. It is quite lengthy for the first novel in a series but it engages the reader throughout, as the plot evolves over time. It encompasses so much within its pages and plot including, but not limited to, strong friendships, deceit and betrayal, adventure, complex yet lovable characters and of course demons who stir up trouble. 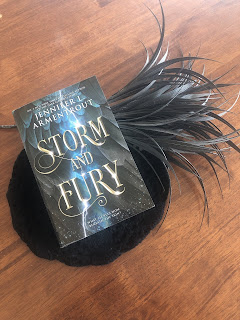 Eighteen year old Trinity Marrow may be going blind, but she can see and communicate with ghosts and spirits. Her unique gift is part of a secret so dangerous that she’s been in hiding for years in an isolated compound fiercely guarded by Wardens- gargoyle shape-shifters who protect humankind from demons. If the demons discover the truth about Trinity, they’ll devour her, flesh and bone, to enhance their own powers.
When Wardens from another clan arrive with disturbing reports that something out there is killing both demons and Wardens, Trinity’s safe world implodes. Not the least because one of the outsiders is the most annoying and fascinating person she’s ever met. Zayne has secrets of his own that will upend her world yet again- but working together becomes imperative once demons breach the compound and Trinity’s secret comes to light. To save her family and maybe the world, she’ll have to put her trust in Zayne. But all bets are off as a supernatural war is unleashed…

The things I enjoyed…


Things I thought could have been adjusted...


Overall, I did thoroughly enjoy Storm and Fury. It had elements which made it stand out from any other fantasy book I have read before and which kept the reader interested and engaged throughout the plot. I would highly recommend it to older YA fantasy lovers who like books with a complex plot and who love the fight of good against evil.

Thank you to the publishers, Harlequin Books, for providing me with a copy for review.
Storm and Fury is out now and can be purchased from bookstores in Australia.