Fierce Fragile Hearts by Sara Barnard is the second installment in the Beautiful Broken Things series. It continues two years after the original story as the three teenage girls from Brighton, Caddy, Rosie and Suzanne, begin to embark down different paths once they finish high school. While the first book was narrated by Caddy, Fierce Fragile Hearts is told from Suzanne's perspective as she moves back to Brighton and begins to come to terms with a range of issues which have been plaguing her for a number of years. This is the ultimate chance for Suzanne to start her life again, with those who have always been there for her through life's ups and downs. 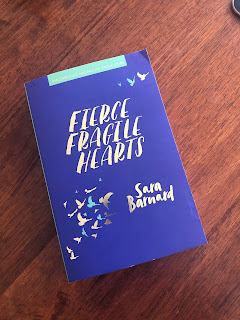 I read Beautiful Broken Things a couple of years ago when it was released and my main issue with the book was Suzanne as a character. I found her to be difficult to understand with her flighty and spontaneous decisions and did not understand why she was so different. After immersing myself into Fierce Fragile Hearts, I have gained a greater understanding of her as a character and why she was so difficult to understand. By having a different narrator, the reader has the ability to come to understand another characters perspective which provides greater depth to the overall story. Fierce Fragile Hearts provides Suzanne with the opportunity to share her struggles and how they have impacted her over a number of years. These are still evident in the present day as she finds it extremely difficult to open up to those around her and wants to be independent yet is barely keeping herself together. I really enjoyed hearing Suzanne's story throughout the course of the book and the way the author wrote about her perspective. Barnard is not afraid to tackle complex issues including dealing with emotional and mental scarring from abuse and does so in a way that is believable.

One of the highlights of the book is how Suzanne comes to terms with her past and decides she wants to better herself for her future. She has been subject to trauma and abuse within her family which has a severe impact on her and how she goes about her daily life. This is something that so many people face throughout their lives and with the events she has been faced with previously, Suzanne wants to ensure they do not impact her future. She has been through so much in her 18 years and overall, this book focuses on her realising her flaws and wanting to overcome them independently. While she finds this is almost impossible to do as Suzanne comes to the realisation that she needs support from those around her, including her friends and (some) family. She is a fiercely strong character who shows determination in everything that she does, even if she does not believe in herself.

Another part of this book which is significantly important is friendship. Despite their differences, Caddy, Rosie and Suzanne are incredibly supportive of one another no matter the distance between them. While Caddy and Rosie head off to university in different areas of the country, the three of them keep in constant contact to ensure that they are always there for one another. There are difficulties that they face over time, but overall, friendship prevails. Another friendship I thoroughly enjoyed reading about was the one that was created between Suzanne and Dilys. While it was an unexpected friendship, Dilys was there for Suzanne when she needed someone the most and continued to be a shoulder to lean on when times got tough. She was an outsider who was able to look in and provide solid advice.


Overall, I thoroughly enjoyed reading Fierce Fragile Hearts. It was a raw, honest and well written book with a focus on friendship and overcoming the struggles of abuse. Barnard has written in such a way that the reader becomes emotionally attached to the characters and is able to understand the issues they are facing.

Thank you to the publishers for providing me with a copy of  the book to review and for the invitation to participate in the blog tour with AusYABloggers!