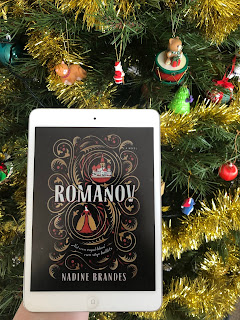 Romanov by Nadine Brandes is a work of historical fiction that will leave you clinging onto hope into the final pages of the text. It is a retelling of the Romanov family and Anastasia which is far more closely aligned to the real story than previous adaptations. Therefore, if you know history, you will know what to expect, to a degree. Regardless of this, Brandes is a magnificent story teller who has the power to weave a magical, cohesive narrative which is raw and emotive.

In this retelling, Antastasia (otherwise known as Nastya) is focused upon attempting to smuggle a spell, in the form of a Russian doll, into her suitcase while travelling on her way to exile in . But she has the head of the Bolshevik army on her tails and he is determined to see the back of herself, her family and all magic in . Nastya, over time, has to make a big decision, whether to release the spell (which is a mystery to her) or come to terms with the consequences of her actions if she does not use it.

This book is full of action and magic, which keeps the reader occupied until the very last page. I thoroughly enjoyed how the author tried to keep as true to the real life events as possible, excluding the inclusion of magic, as it allows the reader to imagine life in Russia in 1918 and witness firsthand, the events which unfolded. While it is still a work of fiction, so many previous adaptations have twisted the story completely and I admire the author and how she aimed to keep it true with some new elements in between. One of those inclusions was the use of magic. By including magic, Brandes was able to add another layer to the plot which turned the narrative into not only a survival narrative, but one with the spirit of hope as well. Magic gave Nastya and the rest of the Romanov’s the hope they needed to get through the torturous exile they were subjected to. They all know that magic was well and truly alive in and remained optimistic that it would have the ability to save them (as well as the white army).

The descriptions in this book were also extremely well done. The descriptions of setting made the reader feel as though they were there, in 1918 in Siberia/Russia. They were so detailed and vivid, giving further depth to the story. The characters were also very complex and well thought out. They each had their own personalities, strengths and weaknesses were made evident throughout the book. By having such detailed characters, the reader is able to understand them better and what may trigger their actions.

Another aspect of the book which really stood out was the strong bond that the Romanov family had. Despite being a large family and being royalty, the parents and siblings stuck together to ensure that they would have the emotional strength to overcome the Bolshevik’s. Though they were subjected to harsh living conditions and even stricter company, they remained optimistic that they would ultimately survive. The love that each of them had for one another was admirable, especially how they each doted on Alexei due to his disability. The development of the relationship between Nastya and Alexei was heart warming as she did everything she could for the tsarevitch.

Overall, I thoroughly enjoyed Romanov and the way it was beautifully written while it focused upon some of the darkest days of ’s history. It captured the raw, true events of the Romanov family, while intertwining some fictional elements as well. I would highly recommend for anyone who enjoys historical fiction or stories of survival, love and family.

*I was kindly provided with a copy for review from the publishers, Thomas Nelson, through NetGalley. All opinions expressed in this review are my own.