Review: The Boy who Steals Houses 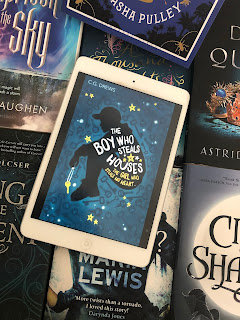 The Boy who Steals Houses is the second novel written by Australian author C.G. Drews. It is just as emotional as her first novel, A Thousand Perfect Notes (if you haven’t read it, please do yourself a favour and pick it up), but also focuses on so many other important issues that other authors seem to shy away from.

Can two broken boys find their perfect home? Sam is only fifteen but he and his autistic older brother, Avery, have been abandoned by every relative he's ever known. Now Sam's trying to build a new life for them. He survives by breaking into empty houses when their owners are away, until one day he's caught out when a family returns home. To his amazement this large, chaotic family takes him under their wing - each teenager assuming Sam is a friend of another sibling. Sam finds himself inextricably caught up in their life, and falling for the beautiful Moxie. But Sam has a secret, and his past is about to catch up with him.

Often it takes me a while to get into a book, but this novel had me captivated from the first few pages. Early on we learn that main character, Sam (Sammy) Lou and his brother Avery are both homeless. While Avery often gets by through couch surfing, Sam goes around breaking into people’s houses, whether they are on holiday or just out for the night, so that he has somewhere safe to stay. He collects the house keys from each house so it gives him a sense of hope that maybe one day he will have somewhere that he can call home. The story is told through both the present day and through a series of flashbacks. The flashbacks retell events which occurred between the boys and various family members over a number of years. The most difficult part I found to deal with was the domestic violence. The domestic violence that both him and Avery were subject to was difficult to read and how Sam in particular was treated by various people within his life was upsetting. Both boys had been through so much in life, they were well overdue for some happiness. Throughout the whole book, all I wanted to do was alleviate some of Sam’s pain.

One aspect of the book I really thought was well done was the Autism rep. All too often authors shy away from representing people with disabilities in their books but the character of Avery was so well done. The tics, panic attacks, need for routine and things to not change and being naïve are all things commonly associated with Autism and these were all represented in Avery. The one thing which stood out to me was his relationship with his ‘older’ friends and how they took advantage of him. This is all too common of people with Autism as all they want is to feel accepted. I loved seeing the relationship between Avery and Sam develop throughout the novel too. Even though Sam was the little brother, he was so protective of his older brother that he would do anything to ensure that he was safe. This was not only in the present time of the story, but through the flashbacks too.

While I absolutely loved every aspect of this book, what really stood out to me were the characters, not only Sam and Avery, but each member of the DeLainey family who appear after Sam is discovered in their house. Each DeLainey family member has their own quirks and it was great seeing them develop a relationship with Sam over time. Moxie was certainly a stand out and she was such a fun character to read about as she dared to be different. It was like reading about a regular family from the suburbs and it was so easy to relate to in that sense. I also really liked reading about the other characters who were key to the story, but who had a negative impact upon the main characters (I won’t go into detail as, spoilers). While these characters were awful to Sam and Avery, it was interesting to discover the reasons behind their actions and how these had an impact on the future.

Overall, I thoroughly enjoyed reading The Boy who Steals Houses. While it was an emotional rollercoaster which involved so many themes, ultimately it was the relationship between Sam and Avery which made this book so special. The brotherly bond was critical to the plot and withheld everything that was thrown at them over the years. So will Sam and Avery find a place to call home? You will need to read this beautiful piece of work to find out!

Thank you to the publishers, Hachette Australia, for providing me a copy from Netgalley in exchange for an honest review.