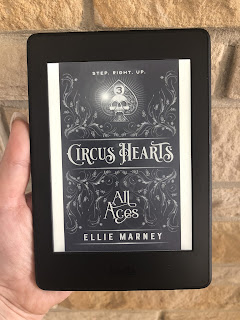 Today I will be reviewing the final instalment in the Circus Hearts Trilogy by Ellie
Marney: All Aces. Like the other two books in the series, this one follows two different characters and their story over a short period of time. We follow Ren, the contortionist, and Zep, the circus dubbed trouble maker, as they both attempt to come to terms with their own family troubles while juggling circus life and the issues it throws at them. This book takes place approximately a month after the second book and follows on with the story of the circus. Throughout the book, the two main characters have to deal with a number of issues that are thrown at them, including: injury, family expectations, avoiding criminal activity and romance. I will discuss some of these below.

I really enjoyed reading through the eyes of Ren as the narrator. Unlike the previous two books who had strong female narrators, Ren is more anxious and awkward, which made her point of view more interesting to read. At the beginning of the book, she is coming to terms with an injury which was sustained at the conclusion of the previous book when the circus was set on fire. She has been out of action due to difficulty with breathing and thinks she is ready to return to performing. Throughout the book, I admired Ren’s determination to return to form and be ready for performing again. While she may not have been ready to do so, she showed her utmost strength and determination to be a part of the team and not let them down even though she was still injured (and to more of an extreme than she first thought). Her countless hours of practice in her room were a prime example of this.

Another aspect of the book I like was the inclusion of Ren’s family. In the previous book, there was the father/daughter relationship between Fleur and Terry and mother/son between Marco and his mother. Both of these pairs were close by the end of the book and the parents were supportive of their child’s choices. In comparison, Ren’s parents differ. They are at the head of a very tight knit and loving family who want the best for their daughter. In this case though, they want their daughter to leave her home at the circus and work in at her uncle’s hotel. While this wasn’t a huge story line within the book in comparison to others, I felt it had the largest impact. Ren wanted to impress her parents and made them proud but her mother had a one track mind of her moving away to work as she believed it would be a once in a life time opportunity. This situation is one so common in everyday life and its inclusion in the book makes it relatable to so many people.

In this final instalment in the series, I also loved hearing more from the ‘bad boy’ of the circus, Zep. In the second book, he was dubbed the trouble maker of the circus and criticised for bringing his personal problems into the circus. In this book, Marney shares another side of Zep that was less evident in the other books in the series. Zep is portrayed as a caring individual who wants to help out, while also remaining wary of his father and his henchmen. I enjoyed seeing Zep’s faith in himself grow throughout this book as he did not believe his skills were up to the standard to perform.

One other thing I found interesting was the relationship between Ren and Zep. At the beginning of the book, they barely know each other. The only real contact they had was Zep saving Ren from the fire. Then, very swiftly, they have fallen for one another through a series of events. While they seemed like quite an unconventional couple due to the difference in upbringings, Marney was able to easily develop a relationship between them that was believable and meaningful.

Overall, I did thoroughly enjoy this series and this final instalment. I loved seeing how the relationships were built, how they were adjusted and how problems were faced head on with great determination. If you are after a YA contemporary, circus book with romance, please don’t hesitate to check out this series!