Today I will be reviewing The Enchanted Sonata written by Heather Dixon Wallwork and providing you with my thoughts. 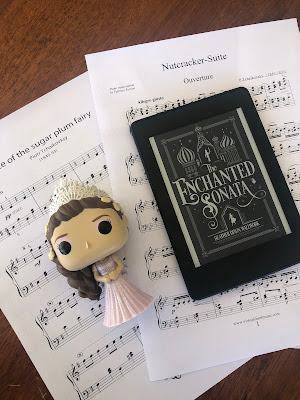 First of all, I would like to thank Netgalley and Smith Publicity for providing me with a copy of this for review purposes.

The Enchanted Sonata is a magical, whimsical book filled with gripping adventure and lovable characters. It is referred to as a retelling of The Nutcracker, which I have not read (so I am unable to draw on any comparisons between the two but will focus my attention solely on this retelling).

The synopsis is as follows:
Clara Stahlbaum has her future perfectly planned: marry the handsome pianist, Johann Kahler (ah!), and settle down to a life full of music. But all that changes on Christmas Eve, when Clara receives a mysterious and magical nutcracker.

Whisked away to his world--an enchanted empire of beautiful palaces, fickle fairies, enormous rats, and a prince--Clara must face a magician who uses music as spells...and the future she thought she wanted. "The Enchanted Sonata," a retelling of The Nutcracker Ballet with a dash of The Pied Piper, will captivate readers of all ages.

I often lean towards retellings of classic tales as I love being immersed into imaginative, fairy tale lands and this is exactly what this book does to the reader. As you read through the pages, the author has created such a stunning, descriptive world where you feel like you are captivated within the story. While it is historical fiction and written at the conclusion of the 19th Century, I could see the parallels between Clara and modern 15 year old girls. She was infatuated with Johann to the point it was almost a bit cringe-worthy all in innocent fun as she idolised him and his music. I feel like parallels can certainly be drawn between 15 year old girls in the modern time and how they may idolise a public figure.

I really loved being situated in the fantasy world of Imperia which reminded me of Russia, which it was clearly based upon. The landscape was described in such detail that it made you wish you were there. The snow filled city, the grand palace, the vast and ever-changing terrain made the adventure even more exciting as you did not know what to expect next. My favourite part of the book would have been the growing relationship between Clara and Nikolai. At first, Clara was quite hesitant towards the Nutcracker and was unsure how to take him. But as the plot progressed and as Clara realised her importance in the story, their relationship began to blossom as her trust of him also grew. Each of the relationships within the pages of this book are well thought out and while the book was short, they were each extremely well developed and you were able to come to love each and every one of the characters too. I also thought the inclusion of the villain’s story into the narrative gave his character more depth. You could come to understand why he was the way he was through these insights into his personal life and how certain situations caused him extreme grief. These interconnections with the overall plot were so well done and make you more aware of the history.

Something else that I adored was the use of the magical book. When Clara receives the book on Christmas Eve, she quietly begins reading its pages but little does she know that it is writing her story as she is situated within it. As events begin to play out, the book fills its pages with the adventures that she is subject to. I’m unsure whether this is part of the original story but I enjoyed reading every time she opened the book, how the plot had developed within it and her place within the story. Magic was such a central element to this book and it was strongly intertwined within the pages

Overall, this book was a glittery, magical, wintery ball of adventure and I would recommend it to people of all ages. It is a short book, but it encompasses so much within the pages and at no time was I bored or did the plot slow down. It was well paced in regards to both the world building, plot development and character development.  It is beautifully written, with well-rounded characters who encompass a wide range of personalities and a complex yet well-developed plot! I really hope that there is a sequel, while the author wrapped it up, I could see that a sequel could certainly be added!

I rated this: 4 stars

Where to buy: This book can be purchased from Amazon (US in paperback or e-book) and is available within Australia from the Amazon store as an e-book