Review: All Fall Down (Circus Hearts #2) 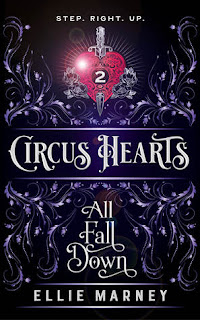 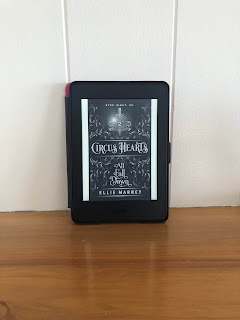 Good morning everyone and welcome back to my blog! Today I will be reviewing the second book in the Circus Hearts series called All Fall Down, by Ellie Marney.
If you haven't read my post on the first book, it may be beneficial to check that out first so you have the relevant background information.

A ringmasters daughter and a bearded lady's son join forces to stop a saboteur. Nineteen year old Fleur Klatsch is loyal to her trapeze team and her ringmaster father, dedicated to the circus, and tough on everyone around her. After a series of accidents at Klatsch's Karnival, Fleur is left holding the ball: she's running the carnival, trying to stop a saboteur, and taking care of her dad. She doesn't need anyone's help, least of all Eugenia Deloren's son, Marco, who's been trying to break out of show life since the moment he was born into it. All Marco needs to do is get Klatsch's back on it's feet so he can leave. But after one fateful kiss with Fleur, will he really want to? And will Fleur and Marco figure out who's trying to kill the show before someone kills them...

Each of the Circus Hearts books follow two different characters but are set in the same place. I think this is a great concept, as like many series, we miss discovering more about the secondary characters. By having it written like this, we get to know more about a wider array of the characters, so it's not just focused on the same ones. Unlike the first installment, in this one we follow 'mean girl' Fleur as she comes to terms with the fall out of the events of the first book and deals with the challenges life throws at her. I will admit, I wasn't too keen when I first read the synopsis and saw it was written about Fleur. Fleur was my least favourite character in the first book, portrayed as being a 'spoilt brat' and getting everything that she wanted. But, this book did show a different side of her that I was not aware of. She is shown as being a kind and caring individual, who will do everything she can for those closest to her and in the circus family. After events that occur which heavily impact her and the circus family, she finds herself not only running the circus but looking after her father at all hours of the night. I loved seeing her relationship with her father develop throughout the book, as in the first book, it just seemed that Fleur was the apple of her father's eye and she wouldn't really do anything for him.

Another character I enjoyed reading about was Marco. Marco was newly introduced but the reader was made aware that he did have prior history in the circus. When he first emerges in the book, we are made aware that there are unresolved issues between himself and his mother. We are not told what exactly they are (until later on in the book) but it is clear that they had an impact which has subsequently strained their relationship. Marco is such an interesting character to read about. I especially enjoyed reading about him due to his previous ties to the circus (so he already knows the others) and his developing relationship with Fleur. He attempts to do everything in his power to assist the circus when the times get tough and wants to ensure that Fleur has all the help she can get. It is evident that there is chemistry between the two of them, but, will it last? Will it become strained? There are so many contributing factors pushing against them so you'll need to read to discover the truth yourself!

This book has more of a focus on character development than plot development. I am someone who prefers plot development and continuous mystery/action throughout. I did not enjoy this installment as much as the first book, I think this may have been due to me loving the Sorsha and Colm story line a little too much, but I still did really enjoy being immersed into the circus action again. It was a great chance to get to know more about each of the characters introduced the book one and then learn more about Fleur and Marco. I also enjoyed the suspense of the action with the individual sabotaging the circus. There were a number of people who could have been the culprit, and it was fascinating imagining each of the possible scenarios with those people involved.  My absolute favourite part of the book was seeing the solidarity of the circus family. While they were plagued by so many troubles over the period of the book, they came together to support each other wholeheartedly to combat the issues at hand. The imagery of the circus that Marney creates is beautiful too. You can imagine yourself in the circus and what is going on around you.

Overall, I thoroughly enjoyed this book. I loved hearing the different perspectives from Fleur and Marco, and seeing how they dealt with the challenges that they were faced with. The Circus Hearts series is easy and fun to read. The mystery, the action, the wide array of characters all make for a thrilling read. I also really like how they are short books, but they are still able to pack so much content into them. The character development from this book is astounding and would take many other authors hundreds of more pages to do the same thing.
I can't wait to pick up Circus Hearts 3 soon when it is released and learn about more of the wonderful characters from Klatsch's Circus!