Where We Begin review

Where we Begin is a unique, coming of age novel which has the reader hanging on until the final pages. While marketed as a YA contemporary, it includes some mature themes which would be targeted for older young adult readers and adults. It is a book which includes elements of a variety of genres including mystery, romance and part thriller while the key theme identified is the emphasis of family. 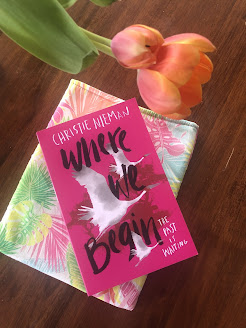 In the book, we follow seventeen-year-old Anna. She is unhappy with her home life as her dad works overseas, there is tension with her mum, her mum also dislikes her choice of boyfriend due to his race and she is overall, very stressed. She packs her things and runs away in the night, to her estranged grandparents house in Central Victoria. She thinks the move will help her work out her feelings, but with two people she hasn’t met before who are acting very strangely, will it bring up ghosts from the past?

I devoured this book in a couple of days. Hooked from the first page and drawn into Anna’s very intense life, I wanted to keep reading to find out what was going on. From the first chapter, it was clear that there was more going on but as we read on, more information is disclosed and clues are dropped. The plot was fast moving, even while Anna was living with Bette and Hessel, and continued to throw things at Anna until the end of the book. I loved the mystery and how it was evident there was something sinister going on in the small town. and This kept me guessing until the conclusion. I don’t want to go into detail because it would be a bit spoilery but there are certainly some family twists and turns! As a frequent reader of mysteries and thrillers I may have caught on to the twist but it still packed a punch.

The highlight of the book for me were the characters. Every single character had strong, distinct characteristics which set them aside from the others. All too often main characters in contemporary books seem to melt into one another and appear the same but not in this one. Anna is a fearless, determined young woman who is seeking answers about her mother’s mysterious past life and won’t let anyone get in her way. Bette and Hessel, the unusual grandparents who have been absent from Anna’s life but the reader is unsure as to why. A stand out character for me was Basil. From his first appearance, he was an instantly likeable larrikin who lit up the room. He was very well written as his enthusiasm and care towards others spanned throughout the entire book. Despite them only just meeting, Basil and Anna struck up an instant friendship which felt authentic. Another character who wasn’t featured much but had a strong impact was Cathy, Anna’s mum. Cathy and Anna had a complex relationship which was fleshed out as the plot progressed and it was nice to see by the conclusion, they were each able to identify their mistakes and begin to move on.

I thoroughly enjoyed this book in its entirety. The descriptions of setting were vivid throughout, making the reader feel like they had stepped out in Central Victoria. The plot was well thought out and the flashbacks provided further context to the issues in the present day. Nieman has approached some serious issues in a sensitive manner and considered scenarios which could be based on true events. I would highly recommend this book to anyone wanting to read about the key themes of family, belonging with some mystery intertwined.

Where we Begin is released on the 25th of August. Thank you to Macmillan for providing me with a copy for review.