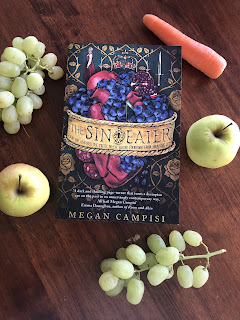 As a historical fiction lover, I was thoroughly looking forward to sinking my teeth into The Sin Eater by Megan Campisi. A beautiful cover with very little explanation for it was about. While the blurb gives little information,

An old adage says that there are really only two stories: a man goes on a voyage, and a stranger arrives in town. This is the third: a woman breaks the rules

I was intrigued to read on to find what the book was about. The book is set in the 16th Century and focuses on the main character, May, who commits a minor crime and pays for it with significant consequences. She becomes the titular character, a sin eater, someone who people call for when a loved one is dying and she takes on board all of their sins as her own. It also involves food, as particular foods represent particular sins and then there is a feast afterwards where the sin eater will eat these foods in the presence of the deceased person. It’s all very strange and reminded me somewhat of a dystopian world where women are viewed as inferior and given this job to repay for their sins.

I loved the idea of this book, something completely different for the genre of historical fiction. I was fascinated by the relation of sins to different items of food, the role of the sin eater and wondered while this was fictional, if something similar was around in the medieval times. The portrayal of the main character of a sin eater was a wise choice too. All too often, the main character of a book would be someone who would be confronted with a character like this but it was eye opening to read through May’s perspective. She went through so many changes at such a young age but approached them with grit and determination. She was really the only character in the book that you really got to know. The other characters were all minor and many were not even referred to by their first names. I was a little confused by the nicknames of the characters living in the castle and they seemed to blur into one. I was not able to identify anything about them and feel it would have been beneficial to know more about them to engage more with the plot.

Another crucial aspect of the plot was the mystery. I love reading about mysteries and trying to decipher who did what, it really draws my interest to a book and makes me want to keep reading. The mystery in this book started off well, trying to work out who committed the crimes by using clues. By the end of the book, it got a little strange and even once it was solved, I found myself very confused as to what actually occurred and ‘who dunnit’. Again, this may have been due to my lack of connection to these other characters and forgetting who was who.

My favourite part of this book would be the writing. It is woven together beautifully, the author carefully considering the language to use to make it feel authentic to the time period. While I may not have been completely engaged with the plot and the characters, it was the writing that kept me reading on. I admire the way that Campisi created the character of May and how she built her up over time: from a fragile young girl who seemed frightened and lost, to a strong, determined and capable young woman who had to grow up almost overnight. She had to face such hardships but would not let others get her down.

I’d recommend this book to those who enjoy historical fiction that is a little bit different, with dark undertones. It is an interesting book that makes the reader think about life through a different lens.

Thank you to Pan Macmillan for providing me with a copy to read and review! The Sin Eater is available for purchase now in Australia, in stores and online!