Ember Queen is the final installation in the Ash Princess trilogy, where we follow Theodosia and her journey towards reclaiming her country which was taken away from her and her family. It is a conclusion of epic proportion that emphasises the justice that should prevail. As this is the final book in the series, there will be spoilers for previous books so if you have not read Ash Princess or Lady Smoke and you do not want spoilers, maybe avoid reading until you catch up! Or if you love spoilers, read along! 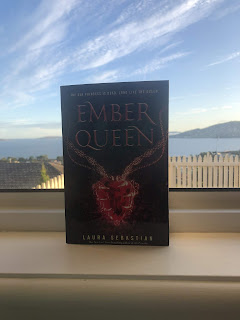 The synopsis:
Princess Theodosia was a prisoner in her own country for a decade. Renamed the Ash Princess, she endured relentless abuse and ridicule from the Kaiser and his court. But thought she wore a crown of ashes, there was fire in Theo’s blood. As the rightful heir to the Astrean crown, it runs in her veins. And if she learned nothing else from her mother, she learned that a Queen never cowers. Now with a misfit army of rebels to back her, Theo must liberate her enslaved people and face a terrifying new enemy; the new Kaiserin. Imbued with a magic no one understands, the Kaiserin is determined to burn down anyone and everyone in her way. Theo must learn to embrace her own power if she has any hope of standing against the girl she once called her heart’s sister.

I came into this book with high expectations. I thoroughly enjoyed the first two books in the series and with the (semi) cliff hanger at the conclusion of Lady Smoke, was determined to see Theo finally rise to power. This book ultimately builds up to the final hurrah where we see Theo and her allies working towards their goal of regaining the power that was taken from them years ago. This has been the focus for Theo since the beginning of book one so to become so close to the goal in this book creates an air of anticipation. The plot is well paced throughout as it builds gradually before reaching the climax in the ‘final battle’ between Theo and the Kaiserin. While many books rush to get to this point, Sebastian successfully builds the excitement and anticipation as many other things are happening in the background. I loved the inclusion of each of the leaders being immersed in each other’s dreams and how while they thought they were safe during this ‘down time’, they eventually discovered they were susceptible to injury.

Another aspect of the book which I really enjoyed and think stood out from other fantasy books, was the magic system. While it has been included in the other two books in the series, I feel like it really made a huge impact in this final installation. The different powers and the impact of characters, including Theo, going into the mines gave them powers beyond their control. I thought it was great that they also freed all the prisoners in the mines too as they could have just kept them there to work for them so that Theo and co could have an even greater hold of power. I admired the way that the characters came to terms with their powers and aimed to use them for the greater good, especially Blaise. Throughout the series he struggled with his strength but in this book, he finally sees how it can contribute in a positive way. The friendship that builds throughout the series feels so authentic and it is great to see that even though Theo and the others are so different, that they can come together to fight for the greater good. Art was a personal favourite of mine and it was wonderful to see her grow over the trilogy and reach her potential despite several setbacks.

I feel like the conclusion of Ember Queen was what the readers were hoping for but it was not without heart ache. It was certainly an epic ending which gave justice to the storyline we have been working towards since the beginning. Like all great fantasy books, it was not without some plot twists which threw what we were expecting out the door. I was on the edge of my seat and finished the second half of the book in one sitting as I couldn’t wait to read what was going to happen next.

Overall, a wonderful fantasy series that focuses on a strong female protagonist and her hoping to reach the justice that she deserves for herself and her family.

Thank you to Pan Macmillan Australia for providing me with a copy to review!