Supernova by Marissa Meyer is the epic conclusion to the popular superhero versus anti-hero series, Renegades. As a final book in a trilogy, it does not let fans of the series down as it packs a punch. It has the action and characters that we have all come to love, as well as a very intense plot which thickens as you get further through the book.

On a side note- I have briefly mentioned something that is unleashed in this book which some may consider a spoiler (but I do not go into detail about it, rather just mention what it does), so if you haven't read the other books, you should feel safe to read on as it doesn't really spoil anything! It is something I thought was a great inclusion so wanted to ensure I mentioned it in my review. 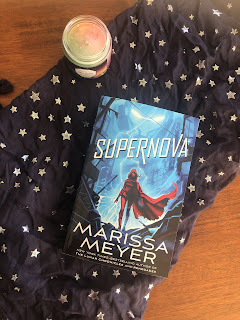 Nova and Adrian are fighting to keep their identities and superpowers secret. While the battle rages between their alter egos and their allies, there is a darker threat shrouding Gatlon City. Nova and Adrian must brave lies and betrayal to protect those they love. Unless they can bridge the divide between heroes and villains, they stand to lose everything, including each other.

Supernova is a huge book, totalling 550 pages. As it is so large, I will only attempt to skim the surface and mention some of the main parts that I enjoyed. Overall, while it is gigantic in size, the plot is constantly turning as the reader keeps turning the page to see what is going to happen next. I came into Supernova hyped, as I could not wait to see what was happening next in the saga. It follows on directly from Archenemies as Nova comes to terms with an act she committed which has serious repercussions for not only herself but the Anarchists and the Renegades. The tensions between the two enemies strengthens as a weapon is released which takes superpowers away. I enjoyed the inclusion of Agent N, as it made the characters wary of who may be in possession of it and that they needed to act carefully so that they were not affected by it. By having a substance in the book like that, something that essentially takes their super human powers away, it really keeps you guessing as to who has it, who will it impact and what will their losses be. The book is centred around people with powers and by including that element and by threatening to make them human, there is a strong sense of living on the edge through the plot.

Meyer creates the most realistic characters who the reader can really empathise with. It was great to see these characters develop further in this final instalment and see the different issues that they were faced with and how they tried to confront them. Nova and Adrian have so much depth and in this instalment, really begin to question where their alliances belong. They have to be two of the best written protagonists I have witnessed in a book before. I love how we get to read from both of their POV, to witness both sides of the story. Meyer does not force you to take the side of either Nova or Adrian, but allows you as the reader to see both of their lives. This is present throughout each of the books but I feel makes the most impact in this book as there is so much more going on. I also really enjoy all of the side characters. In a book with so many characters, you would assume you wouldn’t find out much about them but throughout Supernova, we learn so much more about each of the minor characters. They are so well developed and each have their own backstories which adds to the book in so many ways. I would possibly love to see a spin-off series with some of the other characters as the focus as I believe Meyer has created a wonderful world which can be built upon in the future.

Another aspect of this book I thought was great was the pacing. Often large YA books appear intimidating and are extremely slow and painful to read. Thankfully, this was quite the opposite. While reading Supernova, I never found myself bored or fidgeting. The action packed plot and superb writing kept me engaged from start to finish. There was always something else that kept me hooked to finish reading it.

Overall, I thoroughly enjoyed reading Supernova and would highly recommend the series to anyone who finds themselves looking for a new YA series to sink their teeth into. While I am not normally one to reach for books about superheros, this series has opened my eyes to a whole new genre of YA fiction which I hope will grow in the years to come. Meyer writes in such a way that draws the reader in and they do not want to finish until the book is complete.

Thank you to Pan Macmillan for providing me with a copy of the book in exchange for an honest review.

Supernova is available to purchase in bookstores around Australia now!