Welcome to my stop on the blog tour for Wearing Paper Dresses by Anne Brinsden!

Wearing Paper Dresses is a raw tale, detailing the struggles and triumphs of life in the extremely remote Mallee region in north western Victoria in the middle of the 20th Century. The story focuses on the life of young protagonist Marjorie and follows her and her family’s journey over a number of years. The reader is a witness to the rural lifestyle and shows that no matter how far away you are, the Mallee is always with you. 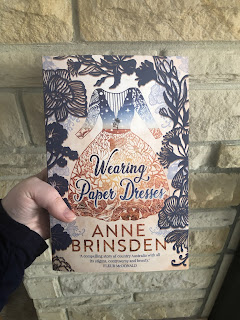 Discover the world of a small homestead perched on the sunburnt farmland of northern Victoria. Meet Elise, whose urbane 1950s glamour is rudely transplanted to the pragmatic red soil of the Mallee when her husband returns to work the family farm. But you cannot uproot a plant and expect it to thrive. And so it is with Elise. Her meringues don't impress the shearers, the locals scoff at her Paris fashions, her husband works all day in the back paddock, and the drought kills everything but the geraniums she despises.

As their mother withdraws more and more into herself, her spirited, tearaway daughters, Marjorie and Ruby, wild as weeds, are left to raise themselves as best they can. Until tragedy strikes, and Marjorie flees to the city determined to leave her family behind. And there she stays, leading a very different life, until the boy she loves draws her back to the land she can't forget...

Delving into the world of ‘country’ based fiction is something new to me but is opening my eyes to a whole new genre of writing. This book, while written in third person, allows the reader to imagine they are present and a witness to the events which are unfolding through the vivid descriptions of setting. While not having travelled to the region, Brinsden successfully captures the essence of the region for all readers as the familiarity becomes apparent as we progress through the narrative. I really enjoyed how it also spanned over a number of years so we could see the family over time and how they adapted to life in the country and their triumphs and struggles. I did find it confusing at times, when shifting between time, to work out how much time had passed and how old the characters would have been. I’m unsure if this was intentional and for the reader to work out, but it did make it a little hard to follow. By the end, I assume Marjorie was in her early twenties but it was not disclosed.

One of my favourite elements of this book was the characters and their relationships and how they developed and faltered over time. Marjorie was bold and daring, Pa was set in his ways, Elise was confused and Jesse determined. Each of the characters were developed so well throughout the narrative as we beared witness to their highs and lows. In particular, Elise was a stand out. Coming from the city, she was already a social outcast when she relocated to the Mallee region. Despite her best efforts to fit in, she found herself in a downward spiral towards insanity which began to severely impact those around her. After catastrophic events occurred, she further distanced herself from her family and the world. The author did this in such a way that the character remained authentic as she believed it was the environment impacting her actions and moods. I liked seeing the relationship between Marjorie and Jesse develop over time as well. From the beginning with him being coined a childish nickname by Marjorie, to them leaning on each over as times became tough and their families became infested with issues. Despite time passing and locations changing, they still had a special bond which held them together.

While I enjoyed the pace of the book, the characters and the country setting, I feel as though the book did lack an overall plot. The plot emphasises the importance of place on the characters and their lives and tells their experiences over a period of time. Despite this, I feel like other than a retelling of events, there was no climax but by the end, there did seem to be a resolution in place. Overall, the story with its chronological tale with flashbacks squeezed throughout, was one I will remember for a long time due to the memorable characters and beautifully descriptive settings.

Thank you to Pan MacMillan for providing me with a copy of Wearing Paper Dresses for review and for the opportunity to participate in the blog tour!