Welcome to my blog and my stop on the Sky blog tour!

Sky by Ondine Sherman is a young adult contemporary book which tackles many issues young adult authors have shyed away from in the past. It considers veganism and the struggles that come with that, animal rights, coming to terms with the death of a parent and trying to fit into a new town. 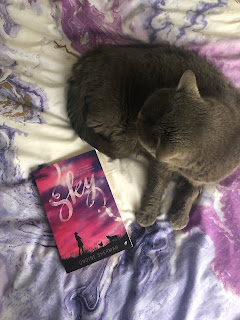 After her mother’s death, Sky leaves her city life to move in with her aunt and uncle in a small Australian town. When her mum was alive, Sky knew who she was: a kind hearted and full of a passion for justice, especially the rights of animals. She was also a vegan whose hero was Jane Goodall. And until recently, she preferred the company of dogs to boys. But being vegan and trying to fit in to her new home isn’t easy. Her aunt has forgotten she doesn’t eat meat, and Sky is desperately lonely without her mother and friends. It seems the only way to fit in and make friends is to pretend to be someone she’s not.
When Sky starts to investigate the local chicken farm for a school project, the cruelty she witnesses goes to the very heart of who she is. She knows she has to do something, but what? Can one single act really make a difference?

Let’s start off with the characters. I thought the inclusion of a vegan protagonist was a great idea, but the execution I did struggle with a little. I found Sky to be quite difficult. She had been through a lot in the past few months with the loss of her mum and with the move to the country to live with her aunt and uncle. Despite this, I still feel like she was very blunt towards her aunt. She was abrupt towards her because she forgot that she was vegan. I feel like Sky could have just told her that she didn’t eat meat because I’m sure it was just an honest mistake and that it wasn’t due to her not caring about her. Her aunt was also going through a very difficult time, losing her sister, struggling to make ends meet and conceive. I just wish that Sky was a little more understanding and could see that she was not the only one with problems in her life.

I found the parts of the book regarding her new friends interesting. All Sky wanted to do was fit in and that ultimately meant hanging out with the ‘cool’ kids. I enjoyed seeing Sky and her attempts to fit in with this group, while it did not eventuate in the end. This is an all too common situation in high schools, with students trying to fit a mould that they don’t fit and bringing it into the book made it more realistic. I was saddened when she was trying to fit in by not eating (where there were no vegan options), I feel like she should have been upfront about this but suppose that she felt she would not have been cool if she’d been honest about her views.

The animal rights arc within this book was extremely prominent and so critical to the main themes being conveyed. I applaud Sky for standing up for the chickens and for what she believed was right. Without her risky antics, the farm would never have been discovered as being unethical and she could live knowing that she made a difference to the lives of hundreds of animals. I feel like by using chickens as examples, you get two sides of an argument. Some people do not believe that having chickens in cages is animal cruelty while others do. If this had of been written with a more severe case of animal cruelty, you would not have been able to see two sides of an argument. Nevertheless, the book goes into great depth about the impact that the cages have upon the chickens and how they would benefit from being free from the cages.

I thought that this was a really eye opening book. This was the first book I’d ever read that is focused around animal rights and veganism. In young adult books, it is so important to consider new views and I feel like this book did it in a positive way. These are issues which are present in today and I felt that has done an excellent job at portraying these to those who may not have been aware of them.
While I am not vegan, while reading this book I came to accept veganism and it increased my understanding of vegans and how they are so passionate about what they believe in and strive to make the world a better place. I would highly recommend this book to younger young adult readers as it is very easy to read and deals with complex issues that they might find easier to understand in a novel format. It places so much importance on veganism as a lifestyle choice and how Sky aims to stick to this despite numerous battles.

Sky is available for purchase now from all good booksellers in

Thank you to Pantera Press and Aus YA Bloggers for providing me with a copy of the book for review purposes and for allowing me to participate in the blog tour!